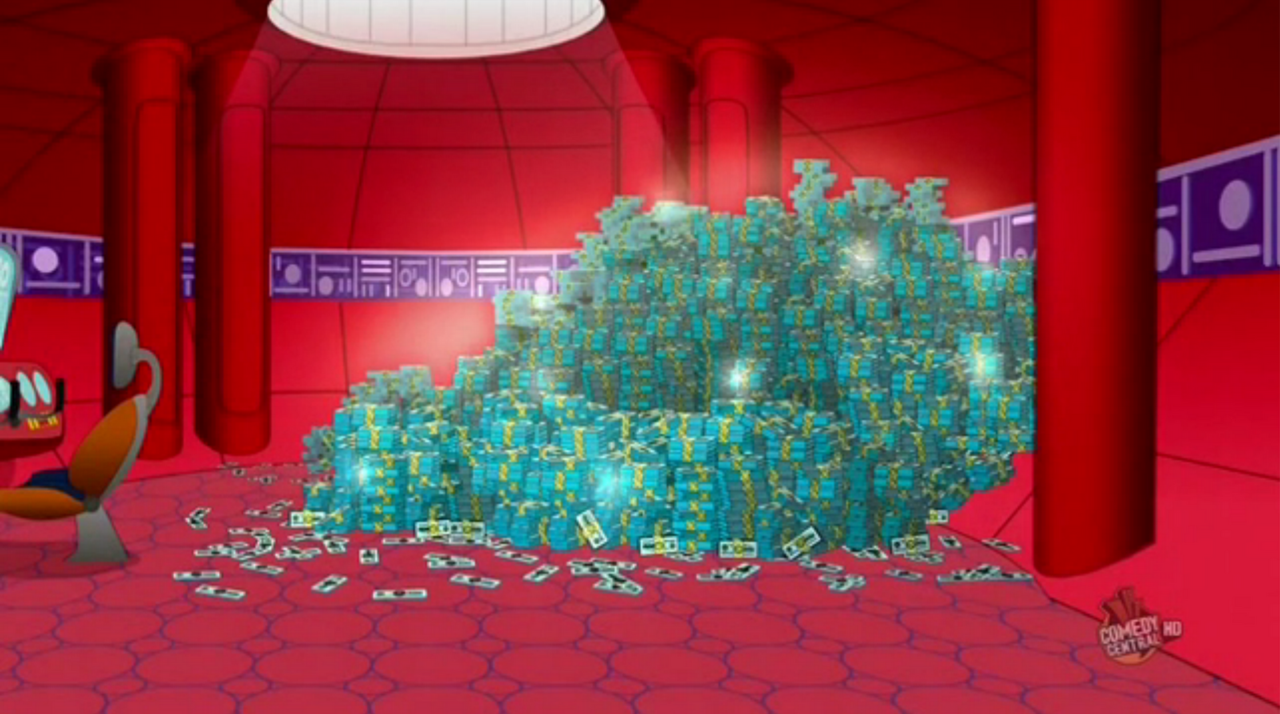 Do We Have Enough Space Bucks?

The question of money itself in the discussion for basic income

Possibly the most frequently asked question of all by those newly introduced to the idea of a truly universal and unconditional basic income is essentially:

That sounds way too expensive... Can we actually afford such an idea?

I want to describe it through South Park. In one of my favorite episodes, "Pinewood Derby", alien cops visit Earth in pursuit of an alien criminal. This criminal has a ship full of "space bucks", which are taken and divided among Earth's nations. Mexico then immediately builds a bunch of hospitals and water parks while China builds 48 soccer stadiums.

This of course is very funny, but what's not so funny is that we actually do think this way. We think that money is real and that money is wealth. But it's neither.

Money does not actually exist.

I like to describe its true nature in the same way Alan Watts did, as a tool of measurement like inches. Money is purely a means of calculating and distributing access to resources. The resources are what's real. All the water, air, wind, land, trees, sunlight, minerals, metals, and all the amazing technology we make out of it, and every human body and mind that imagines it and creates it... that's what's real. Money is not. Money is like inches. Looking at it this way, thinking we don't have enough inches doesn't make any sense at all, does it?

But that's what we continue to do. The Great Depression is such a great example of this weird mental hangup of ours regarding the nature of money, because the money basically disappeared but nothing else did. All the resources were still there entirely unchanged. The companies were there. The machines were there. The people were there. Our capacity for production was absolutely untouched, and yet we stopped producing. Why?

Because we thought money was real. People went to work one day and were told to go home because even though they had all the wood they needed, and all the metal, and all the tools, and all the labor, they were simply out of inches.

This delusion continues to this day because it's the system we all exist inside of. We are born into it and thus is extremely difficult to question. Money is money and of course it's real because we hold it in our hands, and receive it in exchange for work. But is it really real?

I love the space bucks analogy, because it's the exact opposite of what happened during the Great Depression. Instead of the resources being unchanged and people producing less, in the South Park episode, countries cranked up production and produced more than ever. They did this despite no change whatsoever in their ability to produce. Space bucks didn't make them richer. They just simply felt richer. The Earth itself gained no new resources, no new technology, no new people. The Earth was just as wealthy as before space bucks arrived. But because Earth felt it got more inches, it built more.

This needs to be better understood. Money is how we measure access to resources, but it is not in itself resources. And it's also all entirely relative. If one country has 10 space bucks divided among 10 people in a way that everyone gets 1, then they all have the exact same access to their resources. If another country with the exact same resources has 100 space bucks divided among 10 people such that one person has all 100 and the rest have 0, then there's one person with all the access to their resources and the other 9 have no access at all. Which is the wealthier nation? The one with 10 space bucks or the one with 100 space bucks?

Both nations have the exact same resources so the question is irrelevant.

However, the one with fewer space bucks is arguably a better place to live because each person has 10% access to the total amount of resources, whereas the one with 100 space bucks only gives 1 person 100% access. I don't think that person can be considered lucky either, because he's kind of likely to get a pitchfork to the face.

Our GDP (which does not even measure our entire economic output) is measured in our space bucks as being over $21 trillion and the additional cost of a $1,000 per month basic income requires about 4% of that. Is that really too high a percentage of our total capability here in the "greatest country on Earth?" Especially if we also consider the fact that the aggregate burden of crime is also about 8% of GDP and the economic cost of child poverty alone is about 6% of GDP? If we recognize those costs and all the others, we're actually spending more of our resources not having basic income, than we would be if we already had it.

Meanwhile, the current distribution of our total access to resources via space bucks looks like this, with essentially one person actually having all the space bucks, and therefore all the access. So the answer is quite simple.

Yes, we have enough space bucks.

But do we have the will to feel like we have enough space bucks, as Mexico and China displayed in a silly episode of South Park? Will we provide ourselves universally a minimum amount of unconditional access to our total resources for the purposes of securing equal opportunity and unleashing human creative freedom in a quickly technologically advancing world?

Having read this, if you'd really like to dive into the idea of money itself, and happen to have an extra four hours or so, I recommend watching, "Understanding Money."