How to recognize when an anti-UBI title is "fake news"

As someone who eats food, you probably realize that there are some issues to be had with stating that eating food can lead to more malnutrition. First of all, what type of food are we talking about here? Meat and vegetables? Or candy and food made out of plastic? The type of food is an important detail. Secondly, if we are talking about actual food, how much food are we talking? Are we talking 2,000 calories per day or 2 calories per day? The amount of food is thus also an important detail. So when someone suggests that eating food will increase malnutrition, we all have enough personal experience to know that although it's theoretically possible, a more accurate title would read, "Eating food that isn't nutritious, or in insufficient quantities, will fail to reduce malnutrition." 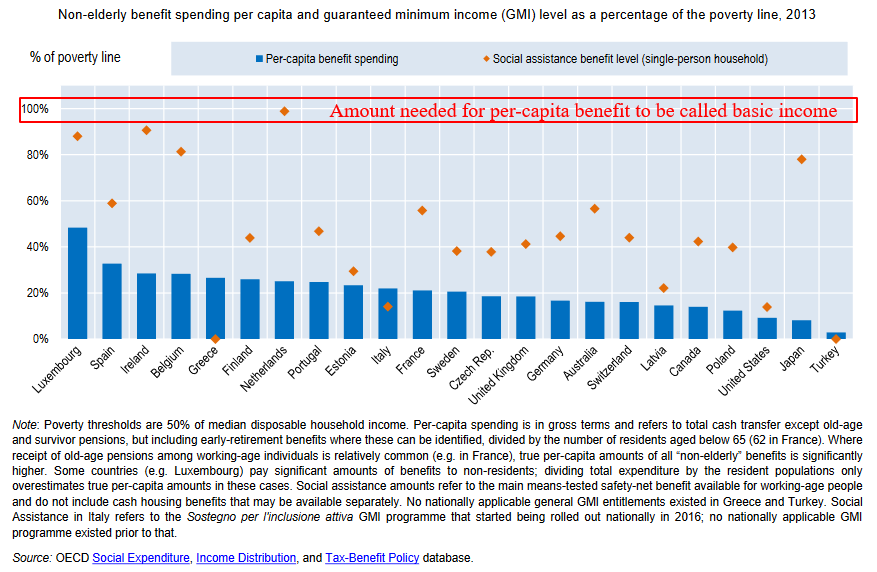 What they did then was conclude that eliminating poverty programs would lead to more poverty if poverty programs were replaced with lower amounts of income that would worsen poverty. If that sounds like circular logic, that's because it is. Of course a partial basic income of say $100 per month instead of a basic income of $1,000 per month won't decrease poverty if it replaces existing programs that now give $500 per month. That's entirely obvious. That's why $100 per month cannot be called a basic income, at least in the US,but that's exactly what the authors essentially did in many cases. They redefined all amounts of universally provided unconditional cash, however small, as basic income instead of partial basic income, universal income, or base income.

On top of this primary assumption and redefining of "basic income", they then focused mainly on revenue neutrality where no taxes are increased, and only cash benefits and tax free allowances are cashed out and provided universally, which means a much smaller revenue pool than could otherwise be obtained by eliminating a lot of tax expenditures and programs they left untouched. On top of this, they made their partial basic income taxable, which again is no longer basic income and instead more like a negative income tax, but with clawback rates that vary according to tax bracket, so isn't really a negative income tax either.

It's kind of curious to me why the authors of the OECD report did it in the way they did it. Literally no one seriously interested in basic income is talking about going about basic income in the way they decided to go about it. I would say they likely did it purely to poor cold water on the global basic income discussion, but at the same time, there's actually some really interesting discussion points in the report that show a solid conceptual understanding of basic income's potential, especially in increasing bargaining power through the power to say to no to low wages, and in improving incentives to work by removing the existing disincentives to work that means-tested benefits create through removal of benefits with earned income. It's also quite interesting to see that it is actually possible in countries like Italy to go about universalizing cash grants in a revenue neutral way that actually does decrease poverty, due to existing benefits being so small for the poorest and disproportionately allocated to the richest.

By and large however, I don't find what the OECD did all that interesting. If we cash out existing programs and divide it universally, it is most likely going to leave current beneficiaries worse off. This is why most basic income advocates talk about an amount that is set at or above existing benefits, and which replaces some welfare programs and tax subsidies, but not others. What I would find far more interesting, and something I'd love to see the OECD do next, is to assume the entire point of basic income is to eliminate poverty, then go country by country figuring out the best way of going about that goal in a way that would leave everyone but the topmost earners better off.

What would the amounts need to be? Which programs and subsidies should be eliminated? Which should be kept entirely or partially? Because revenue will need to be raised to achieve actual basic income, what are the best options in each country for raising that revenue? All of these questions I find far more interesting than "How much worse off will people be if we eliminate a bunch of programs and give people less money in return?"The question itself assumes taxes will need to be raised to unrealistic amounts to achieve full basic income, and that right there is the OECD's biggest misconception. They also aren't alone. This misconception is extremely common, and I believe it arises from how different basic income is from any other policy.

The Instant Rebate of Basic Income

Karl Widerquist is in the process of getting a paper published about this very topic, which you can already read, and I've covered it before as well, but I'll try to summarize it again more plainly here.

Here's why it's so important to understand how this works and what it means. What is the cost to me of giving you $100? It is $100 of course. But what's the cost to me of giving you $100, if in return you give me $70? Well, my cost is $30, and your net gain is $30. But according to OECD logic, and the logic of many others, the cost is $100. But the only thing that matters is the net cost. You would not walk into a store with $20 and decide you couldn't buy a $50 item that includes a $40 instant rebate, because you don't have $50. All you need is $10. That's the difference between the price tag and the rebate. That's the actual cost.

So when anyone panics over tax increases required for basic income, the actual cost requires subtracting out what people get in return. In other words, basic income functions like a fully refundable tax credit. If your annual tax bill right now is $30,000 and to achieve a $12,000 basic income it needs to be raised $10,000, your taxes did not just go up $10,000. They actually went down $2,000. You now owe less money in taxes than before. If your taxes go up $24,000 to pay for your $12,000, your actual tax increase is half what the price tag says. This is already how the tax code works for all the tax credits, allowances, and deductions we have. Tax expenditures aren't seen as having any cost and since basic income replaces many tax expenditures, that part shouldn't be seen as costing anything either. Basic income is a way of simplifying the tax code with one large universal fully refundable credit that everyone gets, instead of the mess of a tax code we have now that's been bought and paid for by special interests. 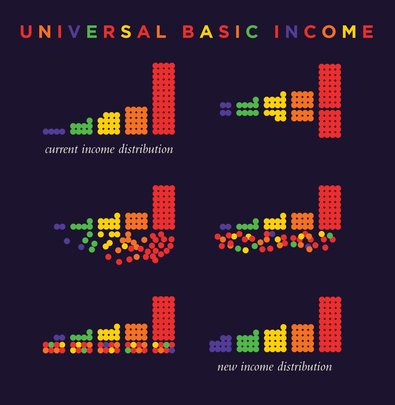 See, when it comes to basic income, we're all paying different amounts of cash to receive the same amount of cash. Set the basic income high enough, be smart about what it replaces, and the result can be only 1 out of 5 people paying higher taxes, and when basic income is taken account as a functioning like a large tax credit, requires of the top 20% of earners tax increases of 10% or less, not 50% or more. For 4 out of 5 people, basic income will increase or at least not in any way reduce their after-tax incomes, and that's true too for existing recipients, as long as making sure no existing recipients are worse off is part of the goal.

The details of how we go about basic income are important, and achieving optimal design should be our goal. Since optimal is in the eye of the beholder, this will require discussions across the aisle, and settling on a design will indeed be a challenging process, nation by nation. But the goal of such a process should be how to go about basic income in the best way possible, not how to go about it based on false assumptions and an insistence on cannibalizing existing programs so as to avoid any revenue increases.

Note that I said revenue increases not tax increases, because taxes aren't even theoretically necessary for basic income, especially not income taxes. There are other ways of creating the basic income revenue pool, like for example removing the ability of banks to create our money supply out of debt, and instead making it ourselves debt-free without expanding the total money supply. Or we may even want to expand the money supply in a technologically deflationary environment with an actual goal of inflation to fight deflation, in which case we could just create everyone's entire basic income out of thin air, and index the basic income to inflation to maintain purchasing power. That may sound crazy, but helicopter money is already starting to be seriously considered all over the world. The point is we have options. I suggest we look into them instead of just assuming the status quo is etched in tablets handed down by sky gods.

We live in a time of clickbait and fake news. Don't just get your information from titles. Don't even just read the articles. Check the sources. Don't even just check the sources. Read the sources. I know I know, it's a pain in the ass to spend that kind of time digesting news and applying critical thinking. This is one of the reasons I think basic income is so important, so that we can all take the time necessary to look deeper into things. But until we all do have basic income, this is just a friendly reminder to not trust everything you read, even from sources like the OECD or those quoting the OECD. The details matter, and details can be left out or altered for the purposes of clicks. Heck, don't even trust me either. Read the OECD report yourself because any summary leaves out details that you may personally find extremely important or interesting, and look into basic income for yourself because no one article will contain everything you need to know to reach your own conclusion. There's a lot to read out there and there's more every day. I urge you to dive on in.

You can even start here with this list of frequently asked questions!