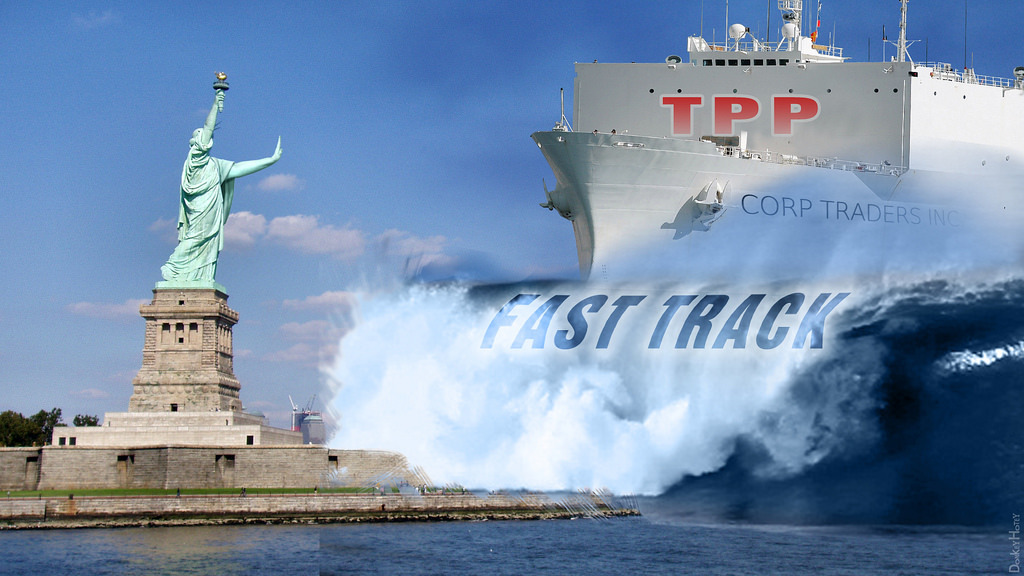 If You Want to Pass Stuff Like TPP... We're Going to Need Basic Income

The Trans-Pacific Partnership (TPP) is a "free trade" treaty that at this point may be Dead on Arrival (DOA) (though the loss is not guaranteed). If passed, it would drop a lot of trade barriers between the US and eleven other countries around the Pacific region.

American unions rallied together for a show of power after years of losing members and political influence. They garnered enough Democratic votes to shoot down their own president, Barack Obama. Sunday's New York Times explained how this coalition came together. The feature pointed out that the unions threatened Democrats who voted for the bill with loss of funding and support. Money talks louder in politics than sound policy.

Whether or not you view this news as something to celebrate or something to lament, there's an important lesson here to learn for those who would most benefit from a treaty like this.

People are afraid of losing their jobs.

As long as work is directly linked to income, this will always hold true. So if you want to do something that somehow threatens jobs domestically, be it an international trade agreement, or the outright replacement of human labor with machine labor, you're going to want to remove the biggest obstacle, and that obstacle is simply fear of poverty.

Remember when Ross Perot made the claim that TPP's older cousin - the North American Free Trade Agreement (NAFTA) - would result in a "giant sucking sound" as companies closed up shop in the US to re-open in Mexico where they would have lower costs of labor? It doesn't even really matter at this point if he was right or not, because that accurately described - and to this day describes - the biggest fear of such agreements.

"Will I lose my job because of this? What will happen to me?"

But let's quickly look at what happened with NAFTA itself. Did it end up causing a giant sucking sound? Well, yes and no.

On the one hand, it greatly increased trade overall and was good for business.

The real advantage for the United States has been in services. American exports of services to Canada and Mexico tripled from $27 billion in 1993 to $82 billion in 2011, resulting in a trade surplus of roughly $30 billion.

On the other hand, although it created jobs in some states, it definitely eliminated them in others:

Some states have lost a lot of manufacturing jobs to Mexico, particularly Michigan, Indiana, Kentucky, Ohio and Tennessee. The Economic Policy Institute, a research group supported by unions, released a report in 2011 saying U.S. workers have seen nearly 700,000 jobs go to Mexican competitors.

According to the Congressional Research service, "NAFTA did not cause the huge job losses feared by the critics or the large economic gains predicted by supporters. The net overall effect of NAFTA on the U.S. economy appears to have been relatively modest."

So the overall effect was relatively neutral, but it wasn't neutral for everyone. Twenty years after NAFTA became the law of the land, Dean Baker effectively summarized the winners and losers in his contribution to the debate in the New York Times.

... one of the main purposes of the agreement was to make U.S. firms feel confident that they could locate operations in Mexico without having to fear that their factories could be nationalized or that Mexico would impose restrictions on repatriating profits. This encouraged firms to take advantage of lower cost labor in Mexico, and many did. This can produce economic gains; they just don’t go to ordinary workers. The lower cost of labor translates to some extent into lower prices and to some extent into higher corporate profits. The latter might be good news for shareholders and top management, but is not beneficial to most workers. Lower prices are helpful to workers as consumers, but are not likely to offset the impact on wages.

This is the problem with NAFTA in a nutshell, and with TPP it's just a bigger nutshell. The big winners would be those at the top, who would enjoy higher stock prices and better returns, while those at the bottom and middle would enjoy disappearing jobs and decreasing incomes. And lower prices would not come close to offsetting these effects.

So what's a stock portfolio-owning American to do? Reducing trade barriers is great for business but not for workers, and workers are the ones with all the votes. Meanwhile, unions want to protect jobs, because the more union jobs, the more union dues. So anything that stands to eliminate union jobs, despite whether or not those jobs should even exist, is going to be fought tooth and nail by unions with the full support of their members.

One strategy - and the one taken this time - is trying to sneak stuff like the TPP past the electorate by holding closed-door talks and keeping the text of the treaty itself secret. This used to work better before everyone carried the world in their pockets. Now such strategies just encourage people to fear these kinds of treaties even more than they otherwise would if presented openly.

Is there a real solution to this quandary for the 1% to support?

In this 21st century of globalized labor and growing automation, the fear of losing one's job needs to be eliminated for both globalization and technology to create positive instead of negative outcomes. This can be accomplished by simply making sure that when anyone no longer has a job, for any reason, their incomes only fall to $1,000 per month instead of $0 because everyone always gets it. It's as simple as that.

Create an income floor with a universal basic income, and suddenly people look at losing their jobs entirely differently. In fact, they may even be happy about it. If the loss of a job results in someone being free to take a bit of vacation, or retire early, or encourages them to go back to school or find a better job or even make their own job, then the fear of job loss is gone. It's no longer a barrier. It's not a barrier to trade agreements. It's not a barrier to automation. It's not a barrier to human progress.

So if we want to remove barriers to international trade, and barriers to the replacement by machines of human labor itself, we're going to need to recognize that fear is one of these barriers, and then remove it as soon as possible with universal basic income.

(Also, let's stop pretending that intellectual property laws have anything at all to do with open markets and greater innovation. The only appearance IP laws should make in international trade agreements is getting rid of them.)

TL;DR: TPP is one of the answers to the question, "Why should the rich support UBI?"

Want basic income now? Contact your rep and tell them to support the Healthy Climate and Family Security Act of 2015 which would provide everyone with a Social Security number an equal share of the revenue raised by making polluting the air we all breathe more expensive, or in other words, a 'cap and dividend' partial basic income. You can also sign this petition to the President and Congress for a basic income for all or volunteer with basicincomeaction.org.