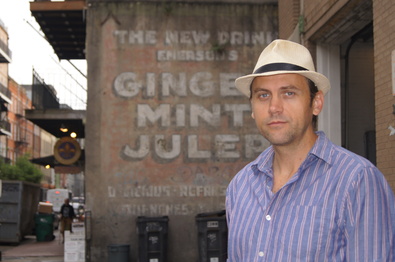 (New Orleans, La.) – Writer and basic income advocate Scott Santens has become the first person to successfully crowdfund a perpetual monthly “basic income.” Starting his campaign on October 13th, 2014 on the crowdfunding platform Patreon, Santens achieved his goal of $1,000 per month fourteen months later on December 11th with the help of 143 funders ranging from venture capitalists and Facebook engineers to women’s rights advocates and artists who all believe everyone needs a basic income.

Quickly gaining prominence in think tanks and policy circles worldwide due to growing concerns brought on by advancing technologies like self-driving vehicles and artificial intelligence, and also growing inequality, basic income is the idea that everyone should receive, individually and without conditions, an income floor sufficient to cover the most basic needs of life like food and shelter. All income earned through the labor market would then be earned on top of one’s basic income as additional income, and many existing government programs would no longer be required as a direct result. This idea is not new, having at one time been advocated by both Milton Friedman and Martin Luther King Jr., but today’s advocates from both the right and left think its day may have come.

“Basic Income has been taking off with incredible speed in the last few years,” says co-chair of Basic Income Earth Network (BIEN) and author Karl Widerquist of SFS-Qatar, Georgetown University. “Activists movements for Basic Income are growing, and it's already getting serious attention from governments in Finland, the Netherlands, Switzerland, and other places. The success of Scott's campaign for the first crowdfunded basic income in the United States is both a reflection of the growth in the basic income movement and a catalyst for further growth as Scott's life now demonstrates how basic income can work.”

Such a real-life demonstration is possible through Patreon. As a Kickstarter-like crowdfunding platform, but for creators instead of products, Patreon supports ongoing campaigns for content creators like musicians, artists, bloggers, vloggers, podcasters, and photographers that are funded by fans of their work with small pledges of monthly support.

"Patreon is supporting the emerging creative class. We see a future where creators like Scott can earn a living doing what they are passionate about," says Graham Hunter, Director of Marketing for Patreon. "A recent grad from Art or Music school right now doesn't necessarily feel confident that the value that they provide will be valued by the world; Patreon is changing that."

Having reached his goal, Scott plans to continue his advocacy for universal basic income and has also promised to pledge any and all future pledges of support to others on Patreon who have pledged to do the same. This is what he calls “The BIG Patreon Creator Pledge” to assist others on Patreon in attaining their own basic incomes. “Creators want to create. Creators don't need to be paid to create. However, creators also need to eat. Creators need to have homes. Creators can't create so long as they aren't free to create,” wrote Santens earlier this year on his blog in an open thank you letter to Patreon. “People need to be free to create and until universal basic income exists, Patreon helps make that possible.”

Scott Santens is a New Orleans-based writer and basic income advocate. His pieces about universal basic income have appeared on such sites as The Huffington Post, the Institute for Ethics and Emerging Technologies (IEET), The Daily Dot, and Quartz. As a basic income speaker, he has presented at the first World Summit on Technological Unemployment and participated as a panelist at the Brookings Institute. As an organizer, he helped plan the first Basic Income Create-A-Thon. He is an advisor to the Universal Income Project, a founding committee member of the nonprofit D.C.-based organization Basic Income Action, a coordinating committee member of the U.S. Basic Income Guarantee Network, and founder of the BIG Patreon Creator Pledge.