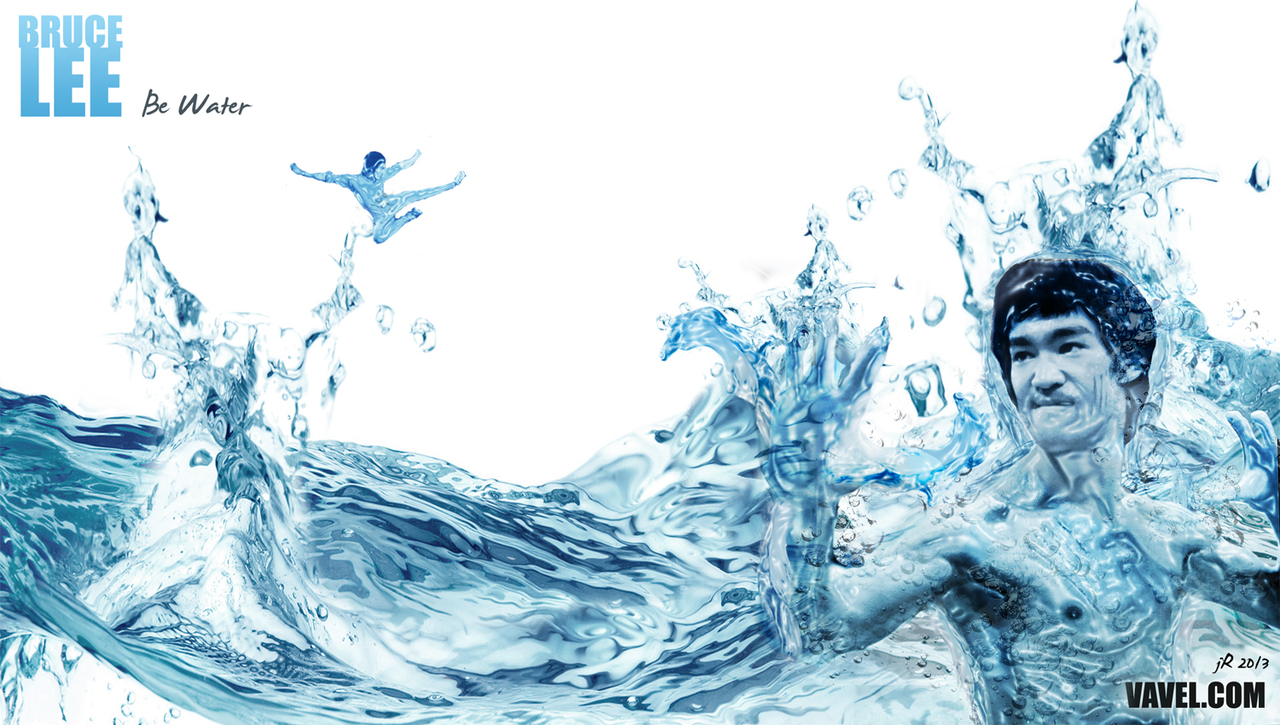 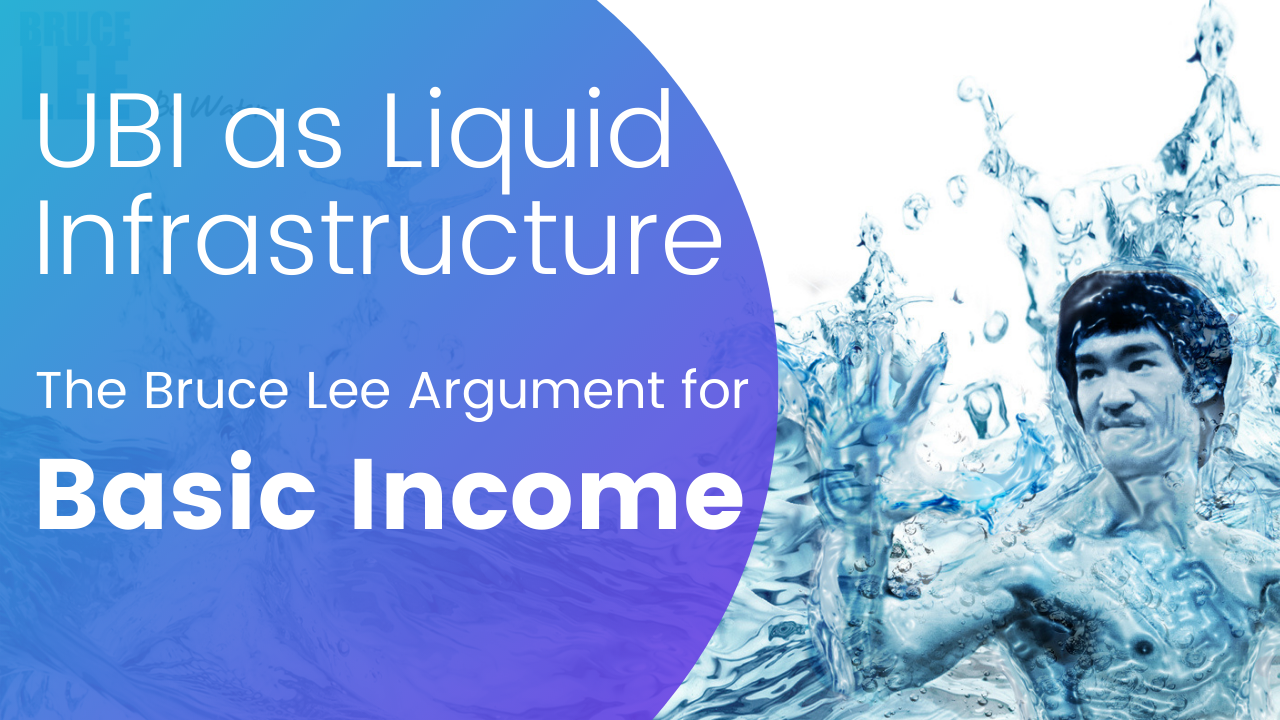 When most people hear Bruce Lee's words about the way water takes the shape of whatever volume it's contained within, they likely think of applying them to martial arts or as some kind of self-help philosophy rule-of-thumb about being flexible in life.

I think about cash.

Cash is anything we want it to be. When we get cash as a gift, it's because the giver doesn't know what we want most, but they also know that we do know. And if we don't know, we'll figure it out.

This also happens to be why cash isn't the default government benefit. Because we can spend cash on anything, people worry (while swirling a glass of wine or smoking a cigar) that we'll spend it "irresponsibly," i.e. on things like drugs and alcohol. But these assumptions have been proven wrong. Most people when provided cash, actually reduce their spending on drugs and alcohol, usually due to decreases in stress, and instead use it on food, housing, clothing, school, medicine, transportation, household goods, paying debt, or building savings. They also tend to use it on capital, and that's where things really get interesting.

People are incredibly creative. One of my favorite examples of how someone used cash was the subject of one of GiveDirectly's blogs titled "There's no charity for power saws." You see, GiveDirectly is a non-profit focused on unconditional cash, and after doing a survey of what cash recipients in Kenya did with the money that most surprised fellow recipients, some fascinating results rolled in. Among them was someone who used the money to buy a power saw. Cleverly, they used the saw to start their own business where they would cut down trees for people, and then also make stuff out of the wood to sell, like furniture or charcoal. Multiple survey respondents were impressed with that use of the money. As GiveDirectly noted in its blog:

There’s no power saw charity. As far as we know, there’s no tin roof charity either, or a motorcycle charity for aspiring motorcycle taxi drivers, a fish pond charity for future fish farmers, or a dowry charity for people who just want to marry. There’s also definitely no combined power saw/motorcycle/fish pond/dowry charity. Cash is a compelling weapon against poverty precisely because people can use it how they see fit, responding to their own specific needs and dreams.

When GiveDirectly entered the charity space in 2008, no one else was focused on unconditional cash. That's why they got into the space. Since then, cash has increasingly become the benchmark to measure all aid against. If an organization is going to spend $1,000 to provide someone something, would the outcome be better or worse than just giving that person $1,000 and calling it a day? The evidence has been building, and it's becoming increasingly clear that in most cases, cash wins.

It's not only that cash can be used on anything, it's that cash can be used in any combination on anything. The way people use cash is like a fingerprint,albeit always changing based on shifting needs and wants. Everyone is unique in the mix of ways we use cash. One person will use 50% on food, 30% on debt, and 20% on medicine. Another will use 40% on housing, 20% on clothing, 30% on school costs, and 10% on savings. 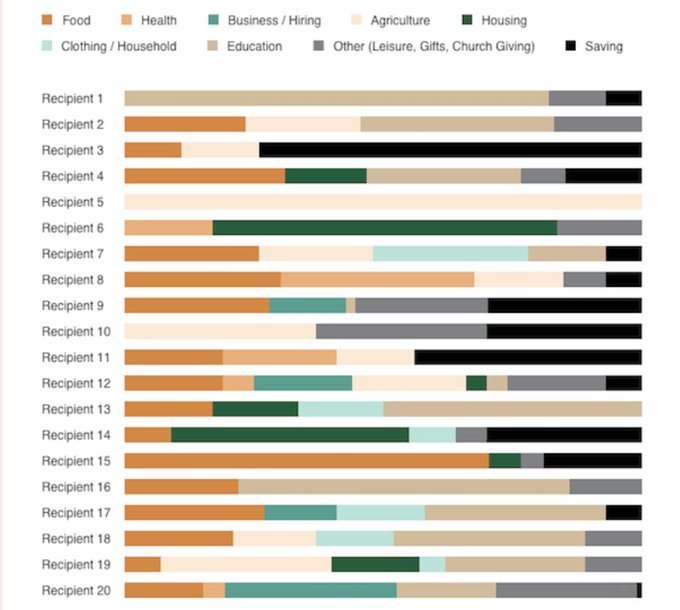 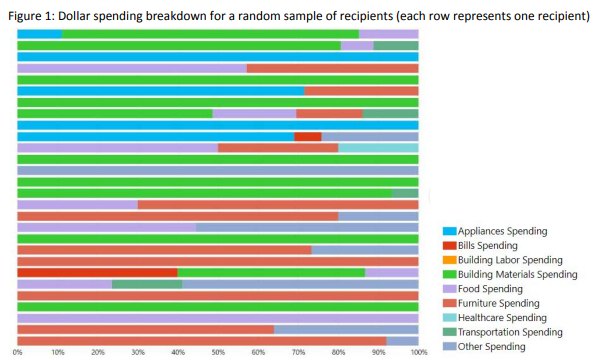 As one cash recipient in Texas described his experience, "You know they didn't come say ‘We gonna give you some shoes that don't fit or some food that you don't like, some cold water that you don't need,’ they say ‘Here, take this and do’... and they trusted us with it...I know what I need. Don't kinda second-guess me.” Or as another recipient in Puerto Rico said, “Well, the cash is better. As they say: that's the key that opens all the doors, the cash. Because with that, one can buy everything. Imagine that they gave me two boxes of beans, three packages of rice. Well, what was I going to do with that? With the cash I can buy the rice, the meat and whatever else. If I need material to build something, I can buy it. It is not the same as choosing something for me that maybe I did not need.”

Because unconditional basic income can become anything it is spent on, it can be thought of as infrastructure that is like water. It is liquid infrastructure. It's a new roof. It's a solar panel. It's a sculpture. It's even a power saw. It is whatever each and every person with it wants it to be.

Typically when we think of infrastructure, I think roads probably come to mind, and roads are extremely important forms of infrastructure, especially in rural areas, but what good are roads if you can't afford a car to drive on them? What good are bridges if you can't afford to cross them? The infrastructure we invest in is only as useful as our ability to use it, and money increases our ability to use it. Money is a kind of last-mile problem solver that functions to connect us to investments that otherwise might not benefit us by filling in any gaps with its shapelessness.

I would also argue there are forms of infrastructure that aren't tangible, one example of which is trust. As revealed in Finland's basic income experiment, unconditional income increased trust in politicians, the legal system, and society at large. It's not that money bought that. It's that an increase of trust in citizens by government increased trust in government by citizens. So not only can UBI become the roads and bridges that connect us, it can also become the glue that holds us together, otherwise known as social capital.

Government is at its best when it's investing in everyone, and in the construction and provision of public infrastructure that everyone can use, but not all of it is usable everywhere all the time, and politicians can't possibly ever know what we as hundreds of millions of individuals each most need at any one time. Therefore, some percentage of government spending should always be allocated as unconditional cash. It's not the only thing governments should provide, because some things are more efficiently and effectively provided in the form of services, but because everyone needs money, and because money can become anything, some amount of basic income should be provided as a universal foundation that can be the most things for the most people, that everything else then operates on top of.